Shortly after the new iPad 2 arrived, I wrote about projecting the iPad display. With the iPad 2, we have full video mirroring. The original iPad has video out, but only for those apps that support it. To show and share screens from the original iPad, I use the IPEVO P2V (Point to View) USB document camera. You connect the P2V to your computer, point the camera at your iPad, and use the included software to show the iPad screen image on a projector connected to the computer.

I recently returned from the 2011 Conference of the International Society for Technology in Education (ISTE), perhaps the world’s largest gathering for educational technology with over 13,000 attendees. While there, I led a three-hour, hands-on workshop called iPad Academy: Tips and Clever Techniques For Teachers and Techies. As part of the  workshop, I addressed the various options for iPad projection. For more on these options see this post and click through to other links. I demonstrated the P2V ($69) and compared the output to a much more expensive (several hundred dollars) document camera available on the presenter’s table. Both were adjusted for optimal display, theirs by ISTE tech support (thanks ISTE!) and my P2V to my settings. Workshop participants and I agreed the small difference in quality did not justify the big difference in cost between the two document cameras.

My setup to point the P2V at the iPad is simple, but hardly elegant. To get the height needed to suspend the camera over the iPad, I set the camera on an inverted coffee cup. I secure it to the cup with two rubber bands and place the cup on a cork coaster to reduce sliding. I capture the iPad in landscape mode since this is closest to typical video aspect ratios of 4:3 and 16:9. 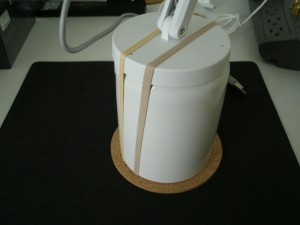 I visited the IPEVO folks on the ISTE Expostion floor and discovered they are about to release a more attractive solution. They’ve designed a folding metal stand with a thin, powerful magnetic disc to mount the P2V. Jeffrey Sung, an Account Manager, demonstrates the prototype in this video I put together in iMovie. I expect the final product will be similar.

Jeffrey also showed me other products now available or soon to be released. The most functional was a carrying case for the P2V. I’ve been transporting mine in the original box or wrapped in bubble wrap, so I was glad to get one of these cases.

The most interesting new product (not yet available) is Chopstakes, a pair of lightweight aluminum styluses. You can use them in one hand like chopsticks or one in each hand. They come in two sizes, starting at (I believe) $34.99. Here’s my picture from the booth. 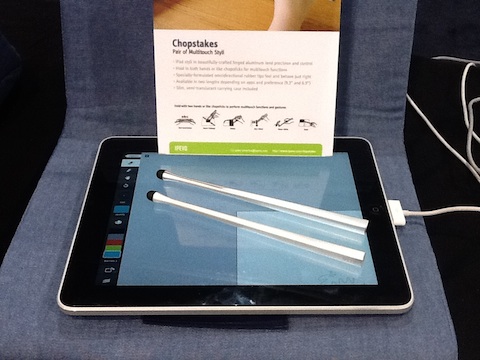 A single Chopstake worked smoothly as a stylus, while two allowed for zooming and pinching. They reminded me of drumsticks and Jeffrey and I agreed they’ve be great for music apps. We tried them with an app on my iPad called Seline HD. You can find more information about all the IPEVO gear at ipevo.com