A few posts back, I wrote about arranging apps on your iPad. Here’s more on managing apps and creating app folders for your iPad, taken from the 2nd edition of my guide to the iPad.

Arranging Apps in iTunes
Need to really clean up your screens? Connect the iPad to your computer with the USB cable. After iTunes loads, select the Apps tab from the row of tabs across the top of the screen. 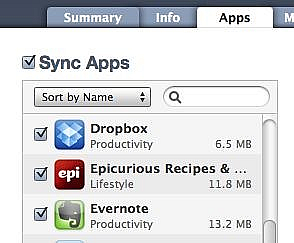 You can also organize apps by creating folders while you’re in iTunes. Drag and drop one app on top of another. In iTunes you can also select multiple apps before creating the folder. Select the first app you want to put in a folder. Use command-click (Mac) or control-click (Windows) to select additional apps for the collection. Then drag the entire pile of apps onto the last app you want in the folder. I suggest you do most of your app organization in iTunes while the iPad is connected to your computer. You can put up to 20 apps in a folder for a total of 4,406 apps. If you need more apps than that you have a bigger problem than app organization. Get help.

By the way, the view of these app screens can change from portrait (above) to landscape (below). It all depends on the orientation of your iPad when you connected the sync cable and syncing began.

How to use Low Data Mode on iPhone and iPad - Cult of Mac https://apple.news/AyV0fN0HeSo2NsE65FKjhYg

How to Secure Your Wi-Fi Router and Protect Your Home Network https://www.wired.com/story/secure-your-wi-fi-router/

10 Incredibly Useful Things You Had No Idea Your Apple Watch Can Do #teachabouttech https://flip.it/PnDtOZ

Your smart TV may be spying on you. Here are step-by-step instructions to stop it - USA TODAY https://apple.news/AYZO9JtYnTJeSaSd4GpVgYA

Getting started with Apple TV: How to set up Apple TV for the best experience - 9to5Mac https://apple.news/AFfgp536vTkyKroMCsV6LgQ