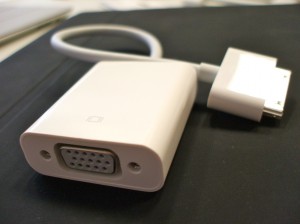 I recently wrote about the best new feature of the iPad 2 – full video mirroring. That is, the external display will show the same content as your iPad 2 screen. One week ago, I led a hands-on workshop on using the iPad as a display device. During the past two weeks, I’ve connected my new iPad to a variety of projectors, monitors and displays, including a big screen HDTV. I can now report the iPad 2 can reliably connect to a VGA projector or HDTV to show whatever is on the iPad screen. The ability to show and share iPad content is no longer dependent on the app being used, but is built into the new iPad. However, some apps do not mirror, but instead only display video out on the external display. For example, the Videos app.

Why (was) is full video mirroring not available on the first generation iPad? Two reasons. The iPad 2 has twice the processor speed and much improved graphics capability, including HDMI output. 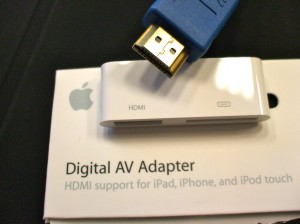 However, the new Apple HDMI adapter (Digital AV Adapter) does work on the first generation iPad if the app supports video out.

Thanks to our regional Panasonic rep, Henry Kazmierski, I also had the opportunity to test a new Panasonic projector that offered wireless connection to the iPad. That’s right, no cables or video adapters needed. The Panasonic (in this case, model PT-LB90NTU) generates a wireless network signal that’s recognized by a free iPad app from Panasonic called  Wireless PJ. The catch? You can only project PDF or JPEG files. Still, setup seemed easy and the app was simple to use. The app worked on both the first and second generation iPads.

For more on connecting your iPad to a TV or projector, see this article. You can find more information about the display capabilities of the original iPad or the new iPad 2 at the Apple support site.

What Do TV Model Numbers and SKUs Actually Mean? How to Know If You're Getting a Good Deal | PCMag https://www.pcmag.com/how-to/what-do-tv-model-numbers-and-skus-actually-mean-how-to-know-if-youre-getting

What green and orange dots on iPhone, iPad mean in iOS 14 | Cult of Mac #teachabouttech https://www.cultofmac.com/723231/green-orange-dots-iphone-ipad-ios-14/

All the iOS 14 privacy features you need to know #teachabouttech https://www.fastcompany.com/90551232/the-top-7-ios-14-privacy-features-what-you-need-to-know?partner=rss&utm_source=rss&utm_medium=feed&utm_campaign=rss+fastcompany&utm_content=rss