Recently, my wife and I decided to watch an episode of a popular show on the ABC network. We keep up with a few TV shows using the iPad instead of watching them live. We gave up cable and satellite TV some time ago, though we do get the major networks over the air thanks to an antenna I installed in the attic. Using the iPad and the ABC Player app allows us to watch when we want with fewer commercials. Using AirPlay and our Apple TV, we mirror the iPad to our HDTV and enjoy the video and audio playing on our (modest) home theatre system.

I decided to try my new iPad mini for streaming and watching this latest episode. Streaming video requires good bandwidth. To ensure a strong Wi-Fi signal when streaming video from the iPad to our HDTV, I always plug in a powerline ethernet adapter in the viewing room along with an Apple AirPort Express. This setup plugs into a wall power outlet to expand my home network without running Ethernet cables through the walls, essentially turning home wiring into an extension of the computer network.

My iPad mini discovered my home network but refused to connect. So I tried a few network troubleshooting steps for the iPad:

So the problem seemed to be with my new iPad. When choosing a wi-fi network, you’ll see  a list of networks within range. (Ask to Join Networks is set to On.)

At the bottom of the list, you’ll see a selection you’ve probably never used, the “Other…” option. This option turned out to be the solution to my iPad connectivity issue. This option allows you to manually add a wi-fi network to the list of networks the iPad can recognize. You’ll need to know the name of the wi-fi network, the type of security used for a password protected network and the password. Here are the steps:
Select Other
Fill in the network name
Tap Security
Choose the security protocol (in my case, WPA2)
Tap the Other Network button (upper left)
Enter  the password
Tap Join 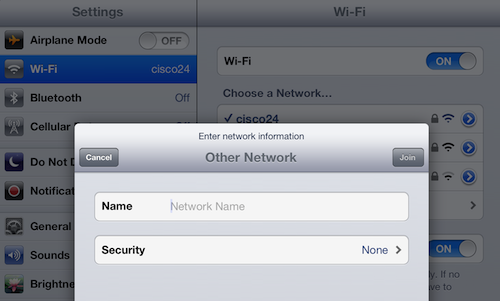 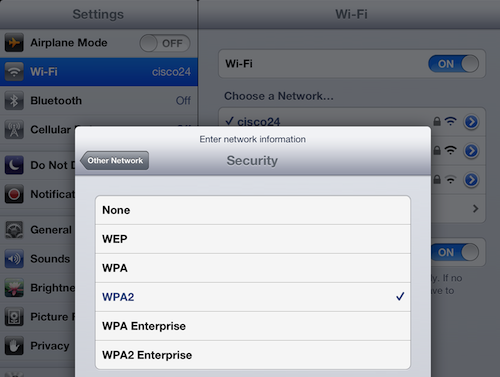 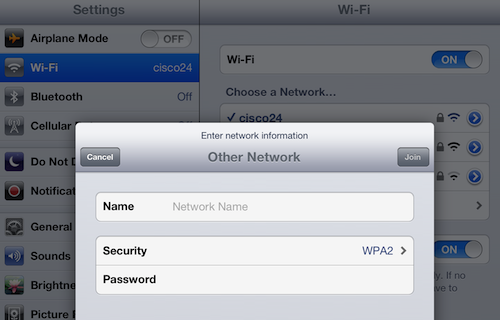 Once I entered all this information, the iPad mini successfully connected to my AirPort Express router. Yesterday, I decided to use my iPad mini again to watch a football playoff game on ESPN 3, using the WatchESPN app. The mini found and connected to my AirPort Express within seconds. A few minutes later, I was watching our local Valdosta State University football team on my HDTV, thanks to AirPlay and the Apple TV. They won and now move on to the NCAA Division II championship. Go Blazers!