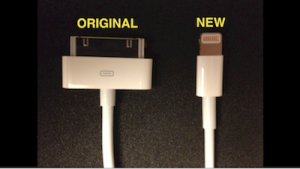 Unlike the old connector, you don’t have to fiddle with finding which side is up. The connector fits both ways, so it’s simpler to hook up without looking. The down side? Your old accessories that use the 30-pin connector will require a Lightning adapter. Note that video signals won’t be passed through the adapter. This means the old 30-pin VGA and HDMI connectors used to send the video signal over a cable to your HDTV or VGA projector won’t work with the 8-pin Lightning adapter. However, Apple will have Lightning VGA and Digital AV (HDMI) adapters available in a few weeks. Though Apple TV and Airplay may be a better solution. Apple has begun to license the Lightning technology, so Apple is no longer the sole source for Lightning accessories. Belkin, a well-known maker of Apple accessories, is releasing a line of Lightning accessories for iPads and other iOS devices. Others manufacturers are also gearing up to produce Lightning adapters and cables. Meanwhile, beware of unlicensed clones.

How to use Low Data Mode on iPhone and iPad - Cult of Mac https://apple.news/AyV0fN0HeSo2NsE65FKjhYg

How to Secure Your Wi-Fi Router and Protect Your Home Network https://www.wired.com/story/secure-your-wi-fi-router/

10 Incredibly Useful Things You Had No Idea Your Apple Watch Can Do #teachabouttech https://flip.it/PnDtOZ

Your smart TV may be spying on you. Here are step-by-step instructions to stop it - USA TODAY https://apple.news/AYZO9JtYnTJeSaSd4GpVgYA

Getting started with Apple TV: How to set up Apple TV for the best experience - 9to5Mac https://apple.news/AFfgp536vTkyKroMCsV6LgQ