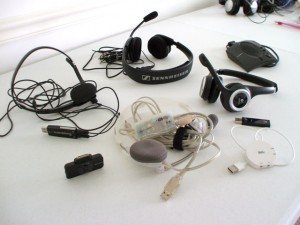 Apple’s iPad Camera Connection kit lets you transfer photos and videos from your digital camera to your iPad. The kit consists of two small attachments that connect to the iPad’s 30-pin dock connector: The first takes an SD card from your camera. The other attachment has a standard USB port. See images below. Numerous sources report this USB port can also be used with most USB connected keyboards and most USB microphones, headphones and headsets. I decided to confirm the use of the USB connector as an audio input/output gadget, using a number of devices I have available. 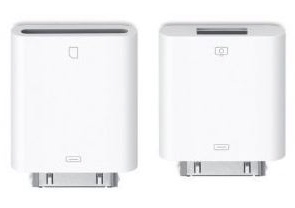 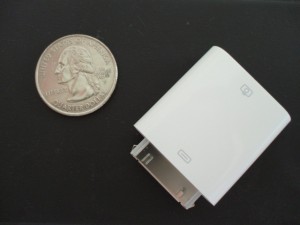 The app I used for testing was Griffin’s iTalk Lite for the iPhone and iPod Touch. This is a simple recording utility I’ve used on my iPod Touch, and was one of the original apps I installed to test the recording capability of the iPad before the arrival of the Camera Connection kit.
Headsets I tried were a Plantronics with USB interface and an older Andrea with a USB interface. Both worked fine. I also tried the Plantronics USB adapter with other headsets that had the typical audio connectors, one for the microphone and one for the sound out or headphones. I tested a Sennheiser and a Logitech. Again, success. I got the same result with these headsets using a Griffin iMic. The iMic is a standalone external USB interface about the size of a hockey puck. You add your own microphone or headset.
Geekspeak: Devices such as the Plantronics, iMic and Andrea use a USB adapter to move the sound processing outside the electrically noisy interior of the computer. This often results in superior quality recordings.
Next up was the Logitech ClearChat PC Wireless, a wireless headset with a USB receiver. Not only did this work some distance away from the iPad, but I was able to control the iPad playback volume and muting with the controls on the remote headset.

Next I tried a Belkin TuneTalk microphone that connects directly through the Apple Dock Connector. I’d used this for making recordings on my iPods and was curious about use with my iPad. I plugged it in to the Dock Connector and my iPad politely informed me that “This accessory is not supported by iPad.” I tested recording anyway, but the iPad was correct. 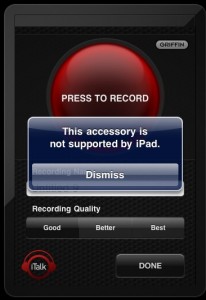 Finally, I decided to try a wireless Keyspan remote control with USB receiver that I’ve used in the past for controlling Keynote presentations. (Keynote is Apple’s presentation program, part of the iWork suite of tools along with Pages for word processing and Numbers for spreadsheets.) Though I could control the volume and mute the sound of the iPad, advancing the slides did not work.
You can use these USB connected headsets or microphones to make Skype calls too. Others report the USB connector also works with a bar code wand and single non-SD card readers. What about USB flash drives and portable hard drives? Not without jailbreaking (modifying) your iPad, which I don’t recommend.

Want more tips like this one? Get the eBook.