Perhaps I should have waited. I’ll explain below…

Many classrooms, conference rooms and boardrooms are equipped with computer projection systems. You can easily connect your iPad to a projector with Apple’s VGA Adapter and a common VGA cable. This adapter and cable combination allows you to show content from your iPad on the projection screen. I first wrote about this back in August of 2010.

This method of sharing your iPad screen with an audience is useful, but not truly mobile. You could only wander as far from the projector as the cumbersome cable allowed and a tug on this setup often resulted in accidental disconnection. Since then, new options for showing and sharing your iPad screen on an HDTV or a projector have become available. I’ll describe one of those options here – connecting you iPad wirelessly to a projector. In upcoming posts, I’ll address a few of the other ways to mirror your iPad to a projector.

AirPlay is Apple’s technology that allows you to stream music, photos, and video wirelessly from your iPad to an Apple TV or another AirPlay-enabled device such as speakers or A/V receivers. AirPlay makes it easy to send your iPad screen to Apple TV. The challenge is getting the signal from the Apple TV to your VGA projector. Apple TV is designed to connect to HDTVs using an HDMI connector and cable. 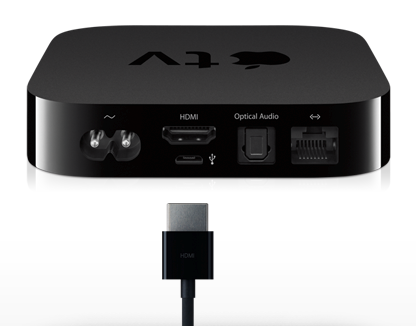 The projector in a typical meeting room or classroom has a VGA connector. What we need is an adapter to convert or transcode the HDMI signal coming from the Apple TV to the VGA signal needed to go into the projector. 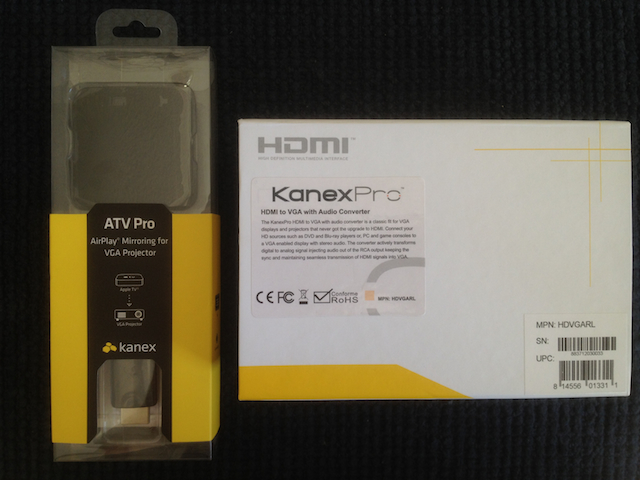 A few months ago, I purchased the KanexPro ($65.00). That’s the box on the right above. I’ve tried a few other HDMI to VGA adapters, including two costing less than $50.00. These adapters worked, but I’d describe the resulting output as only satisfactory. The projected image wasn’t as sharp as I wanted. By spending just a little more I got a definite jump in quality. The projected image was sharper and brighter than the less expensive adapters I’ve used.

Perhaps I should have waited. A short time after I bought the KanexPro, Kanex released a new model called the ATVPro. That’s the model in the package on the left above. I contacted the folks at Kanex and they were good enough to send me one of the new devices for review. You can see a comparison of the two models in the photo below.

The KanexPro requires an external power source and a separate HDMI cable. The KanexPro unit weighs a bit more and uses dual RCA jacks for sound output. The ATVPro is a single unit that requires no external power plug, has an integrated HDMI pigtail cable, and is practically weightless. It uses a standard, mini-audio jack (3.5mm) to output the audio signal. This audio connector is the one typically found next to the VGA input on a projector. (Though the truth is the speakers built in to most projectors won’t produce room-filling, quality sound.) The KanexPro model does have a sturdy metal housing versus the plastic housing of the newer model. However, if you travel as I do to lead workshops or presentations, the ATVPro is clearly the better choice. Oh, and it costs less than the ATVPro. About $60.00.

What about the quality of the projected display of the older Pro vs the new ATVPro? In my limited testing, I found the performance of the two models comparable. I’m not really disappointed that I bought the earlier model. After all, I had good use of the Pro before the ATVPro model hit the market. Where power is readily available and for more permanent installations, I recommend the KanexPro. Mobile professionals will appreciate the features of the ATVPro.

With a $69 Apple TV and the Kanex ATVPro, you can mirror what’s on your iPad almost anywhere you find a projector. If you’re an iPad-toting, content-showing presenter, the Kanex ATVPro should be part of your kit. 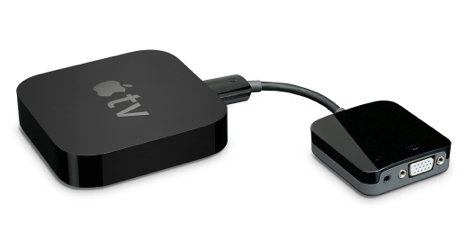 How cellphone location data can save us from a coronavirus recession https://www.fastcompany.com/90480153/how-our-cellphone-location-data-can-save-us-from-a-covid-19-recession

Free Software That Businesses, Schools And Others Can Use During The COVID-19 Crisis https://www.forbes.com/sites/martingiles/2020/03/19/free-software-for-businesses-and-schools-covid19/

7 Tips for How to Use Zoom Videoconferencing Like a Pro | Wirecutter https://thewirecutter.com/blog/use-zoom-like-a-pro/?utm_source=rss&utm_medium=feed&utm_campaign=RSS%20Feed

How to Reset Your Web Browser and Start Again From Scratch #teachabouttech https://gizmodo.com/how-to-reset-your-web-browser-and-start-again-from-scra-1842094169

Do these three things to protect your web security camera from hackers | ZDNet https://www.zdnet.com/article/do-these-three-things-to-protect-your-web-security-camera-from-hackers/

Smart tips and shortcuts for using Your Mac. https://apple.news/Al6om_lr4SK6UFOX4nrFPUg