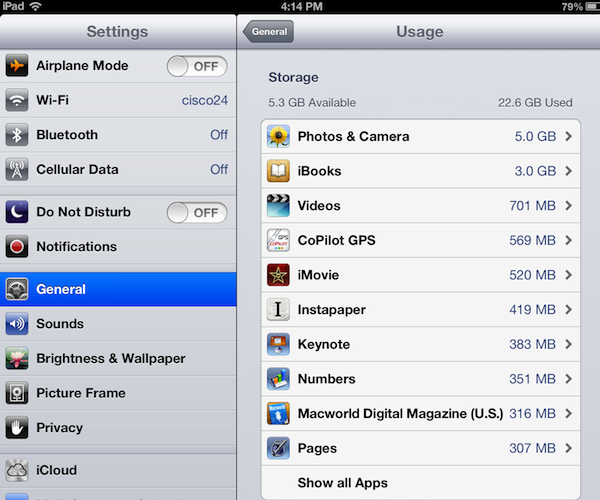 One of my readers recently wrote me concerning an iPad error message. She received it while trying to install a new app on her iPad. She was sure she had enough room left to install the app. But she told me the message “says it can’t download because there isn’t enough room.”

The error message was actually about not enough “free space” to install the app. An app install generally requires twice the size of the app in free space on your iPad. The download uses a temp file for the installer, so the space needed can be much more than the size of the app. This is especially true of large app files such as complex games and detailed map programs.

By the way, you may have noticed that many popular apps have increased dramatically in size during the last year. This is largely because of the Retina Display on newer models of the iPad. It takes many more pixels to generate those sharp graphics on the iPad screen. Screens on these new models have four times as many pixels as older models, so apps contain new images that require more space. These high quality images generate larger files in terms of megabytes.

You can find which apps are taking up the most memory on your iPad. See this article for directions.

iPad Memory: How to Find Content Taking Up the Most Space on Your iPad

How to Automatically Mute Yourself in Zoom Meetings | WIRED https://www.wired.com/story/auto-mute-yourself-zoom-meeting/